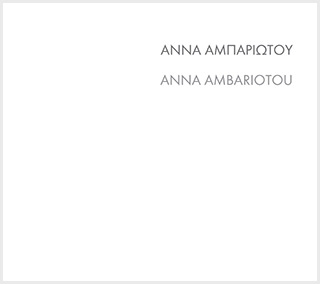 The body is a big sagacity, a plurality with one sense, a war and a peace, a flock and a shepherd.
Friedrich Nietzsche

Our bodies are apt to be our autobiographies.
Frank Gillette Burgess

In this new chapter of her work, with the eloquent title of "Mr X and The Lack of Gravity", Anna Ampariotou investigates the human body simultaneously as a starting point and as a destination. Utilising an effective vocabulary of austere lines and robust forms and electing the deafening presence of the white field as a common, naked landscape, which her heroes inhabit, but also as a vibrant and dominant colour, whose addition or subtraction brings out fresh motifs, she creates stark pictorial fields, haunted by the remembrance of her familiar video art, where the human body, usually nude, plays a leading role: exposed and narrating, it suffers and rests, is tested and feels, encounters and crosses paths with the boundaries of other bodies, collecting foreign experiences and mismatched fragments of humanity.

In the absence of a background, the painter utilises the body as her personal diary, with concise narrative bursts, so that beyond being just the content becomes an environment in itself: a private meeting space is implied with the spare, hovering existence of a sofa; the external space is traversed with laborious steps by a naked woman on wood crutches, and the impressive tattoo on the painter's favourite model is transformed into the symbolic dress of its natural and conceptual nudity.

The fundamental goal of this idiosyncratic narrative visual arts find that Abariotou utilises, is the very availability of her models, the issue of who accepted and who declined to pose naked, debunking her initial expectations and confirming the fact, that the relationship each of us has with our body is particularly fluid and is not a function of a progressive spirit. People silently installed in the studio expose themselves naked to the artist's all-encompassing gaze and magnifying photographic lens, and also encounter the viewer's gaze with the same unexpected familiarity. They are diverse and at the same time unanticipated in their assent, an assent, which one way or the other gradually extends, leading the models to be reconciled with their own body at the end of the procedure. The first to commit himself, Alekos – one of the few remaining genuine advocate of a rock lifestyle, according to the painter: "in a way, when he started to pose, he swept along my entire painterly universe to his dance rhythms". He was followed by young girls and mothers, actors, DJs and executives in multinational corporations, couples (some of whom broke up in the process) and singletons (who became couples during the course of this); sometimes standing, at other times sitting down, bent over or resting, raising the incorporated essence of their existence to the therapeutic white.

At the edges of each pose, there lurks a story - the viewer will subsequently have the capacity to decide on it: hints of roads and crossroads, inventions of studio space, silently inhabited pauses, concise procedures of meeting and fragmentary codes of conversation are confirmed with spare inserts of minimal but definitive symbols of humanity. A tattoo, a handbag or an armchair, a teacup or a boot, a worn pair of jeans or a dog that belongs, are established on the canvas, at times as minimal tools of the composition and at other times as decoders of events.

"The naked body never lies", noted choreographer Martha Graham. But what does a naked body mean? "To be naked is to be deprived of our clothes, and the word implies some of the embarrassment most of us feel in that condition. The word 'nude', on the other hand, carries, in educated usage, no uncomfortable overtone." noted Kenneth Clark in A Study in Ideal Form, distinguishing the two concepts. "The vague image it projects into the mind is not of a huddled and defenceless body, but of a balanced, prosperous and confident body" he concluded. Throughout art history, however, many artists made deliberate use of the overwhelming confusion that rules viewers, due to the differentiation in the truth of the two conditions, noted David Rimanelli in his article The Nude stripped bare. 1 It has often been asserted that Modernism begins with Manet, in particular with those paintings wherein the vexations of the unclothed female body burst forth with a power of disquietude that appalled the public: Le Déjeuner sur l' herbe (1863) and Olympia (1863). The former picture had been exhibited at the Salon des Refusés, and its irksome model was Titian's Venus of Urbino; whereas the latter, where feminine flesh was transformed into a lambent form, was the shocker of the official Salon of 1865. Both paintings, however, display an uncertainty about the status of the nude female figure, an uncertainty that points perhaps towards Kenneth Clark's distinction between the naked and the nude. These women fail to sustain the idealisation of the nude, slipping decisively into the embarrassing (for some) terrain of the naked. "In other words, Manet deprives his models of the acceptable academic veneer of classical nudity, forcing them into the modern age, a naked age, disturbingly and yet ambiguously contemporary." concluded Rimanelli, while simultaneously referencing Clark's perspicacious interpretation: "The Olympia is a portrait of an individual, whose interesting but sharply characteristic body is placed exactly where one would expect to find it. Amateurs were thus suddenly reminded of the circumstances under which actual nudity was familiar to them, and their embarrassment is understandable." Those amateurs would be understandably embarrassed to see nakedness in such familiar circumstances: in a brothel, where they are paying clients.

If the naked and the nude as archetypes stand at the outset of Modernism, then both became thoroughly discredited and disposed of by Modernism's end. And yet the unclothed figure persisted in certain forms, for example the deformed painting of Félix Valloton, or, much later, the poetic abstraction of John Currin. For 'Dear Painter, paint me...', an exhibition mounted at the Centre Pompidou in 2002, which bore the subtitle 'Painting the Figure since late Picabia', Alison Gingeras, one of the curators, wrote: "Beginning with Francis Picabia's late nudes from the early 1940s, the question of painting as a filter of mass media's impact on both individual and collective sense of identity has emerged as a key preoccupation of the artists in the exhibition". Among them were Sigmar Polke, Martin Kippenberger, Neo Rauch, John Currin, Luc Tuymans and Elizabeth Peyton. Their paintings "shunned for their 'regression' into realism and their embrace of kitsch - drew their pictorial source from tawdry black and white photographs culled from soft-core pornography magazines", reflecting and dissecting an introverted yet seductive universe.

In direct contrast to the traumatic exposure of the body is potential the capacity therein for self-awareness: "It is in moments of illness that we are compelled to recognize that we live not alone but chained to a creature of a different kingdom, whole worlds apart, who has no knowledge of us and by whom it is impossible to make ourselves understood: our body" noted Marcel Proust. Writing autobiographies on the bodies of her models amidst the serene silence, speaking truth without shame on the naked nudity and clearly divested of any voyeuristic intent, Anna Ampariotou's painting has shrugged off any stereotypical models, and is equally honest and lucid in its style and its form as in its conceptual framework; it addresses mainly the necessity of self-awareness of the body as self, the need for the "here" of the body as an antidote to the loss of self in a pitiless heterogeneous universe.

if you wish to contact Anna Ampariotou, please send your message to the email address below